Homosexuality in Dracula by Bram Stoker

It took me a long time to understand that my fascination with vampires resulted from elements of homosexuality in Dracula, which I first encountered at the movies as a kid. 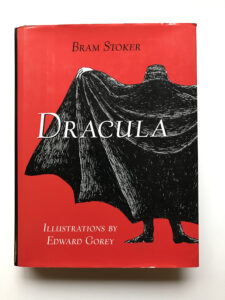 The cover of Dracula by Bram Stoker, illustrated by Edward Gorey, 1996.

While doing research for Medicine For The Blues trilogy, I read a lot of footnotes and bibliographies and that’s how I ran across this intriguing article—a sharp-witted interpretation of homosexuality in Dracula, the original vampire story: “Kiss Me with those Red Lips”: Gender and Inversion in Bram Stoker’s Dracula, by Christopher Craft. 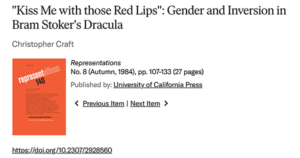 I must have been 10 or 12 when I saw the 1958 movie Horror of Dracula with Christopher Lee in the role of Dracula and Peter Cushing as Dr. Van Helsing. I have been fascinated with vampires ever since, no doubt because of the homoerotic spectacle of one man biting another on the neck (necking?!). Craft’s article helped me understand my attraction. 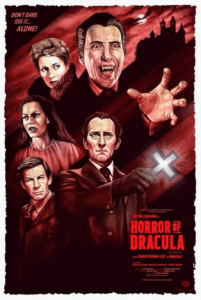 In his article, Christopher Craft repeatedly raises the issue of male anxiety in Victorian England, both in relation to the rise of “the New Woman,” but more significantly, the specter of homoeroticism.

Here is an excerpt from Craft’s article pointing out elements of homosexuality in Dracula:

This moment is interrupted, this penetration denied. Harker’s pause at the end of the paragraph (“waited—waited with a beating heart”), which seems to anticipate an imminent piercing, in fact anticipates not the completion but the interruption of the scene of penetration. Dracula himself breaks into the room, drives the women away from Harker, and admonishes them: “How dare you touch him, any of you? How dare you cast eyes on him when I had forbidden it? Back, I tell you all! This man belongs to me”. Dracula’s intercession here has two obvious effects: by interrupting the scene of penetration, it suspends and disperses throughout the text the desire maximized at the brink of penetration, and it repeats the threat of a more direct libidinous embrace between Dracula and Harker. Dracula’s taunt, “This man belongs to me,” is suggestive enough, but at no point subsequent to this moment does Dracula kiss Harker…

Homosexuality came vividly into public consciousness with the notorious trial of Oscar Wilde in 1895. Stoker’s novel was published only two years later in 1897. 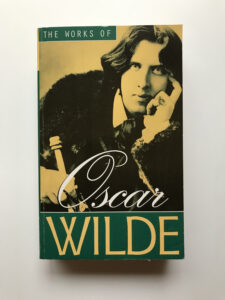 The news clipping below is from microfilm of The Oregonian, 25 May, 1895: “ENGLAND’S NASTY SCANDAL. Oscar Wilde’s Trial Continues to Prove an Attraction.” The Wilde trial was not just news in England, but appeared across the USA. 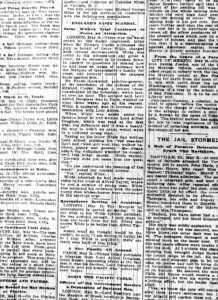 ENGLAND’S NASTY SCANDAL.
Oscar Wilde’s Trial Continues to
Prove an Attraction.
London, May 24.—There was the usual
crowd at Old Bailey courtroom today
when Sir Edward Clarke addressed the
jury in behalf of Oscar Wilde, charged
with serious misdemeanors. Wilde was
called to the witness-box and given a
chair, as he seemed to be broken down.
In answer to questions he related how
he had been on terms of intimacy with
the Marquis of Queensberry’s family for
years, and entirely denied the charges
made against him.
Sir Frank Lockwood, solicitor-general,
at the conclusion of the address of Sir
Edward Clarke, began a severe cross-
examination of the defendant, which last-
ed over an hour. The accused said Lord
Alfred Douglass was in Paris, whither he
went three weeks ago at his request.
Wilde, it appeared, was in constant com-
munition with Lord Alfred.
When Wilde was asked about the
famous letter he had written Lord Alfred
Douglas, which was read at the first
trial, the defendant said it was a beauti-
ful way in which an artist would write
to a cultured young man.
Taking up the letter Wilde had written
Lord Alfred, praising his “red rose-leaf
lips and slim gilt soul that walked be-
tween poetry and passion.” Sir Frank
asked the defendant whether he consid-
ered this letter decent. Wilde replied,
“Decency does not come into the ques-
tion.”
“Do you understand the meaning of the
word?” Asked the counsel sternly.
“Yes,” replied Wilde.
Wilde admitted he had made repeated
visits to the room of Alfred Taylor, where
he met a number of young men. Wilde
also admitted his intimacy with the other
young men whose names were mentioned
in the previous trial.
—
Queensberry Betting on Acquittal.
LONDON. May 24.—The Marquis of
Queensberry is quoted as saying: “I do
not wish to see Wilde further punished.
He has suffered enough. I only want to
keep the beast from my son. Every one
knows Wilde is no better than Alfred Tay-
lor.”
Asked what he thought would be the
verdict, he said, “I am willing to forfeit 100
to 1 that Wilde is acquitted; there are
many men back of this thing.”
—
A Nice Family All Around
PARIS. May 24.—Temps today publishes
a telegram from Lord Alfred Douglass,
dated Rouen, expressing regret at the fact
that it was his brother, Lord Douglass, of
Hawick, and not himself who “corrected”
their father.
—

In Chapter 4 of Peter Boag’s Same-Sex Affairs, Constructing and Controlling Homosexuality in the Pacific Northwest, he traces the influence of the Wilde trial “From Oscar Wilde to Portland’s 1912 Scandal.” 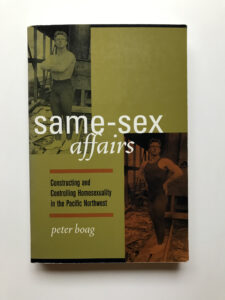 George Painter’s book The Vice Clique: Portland’s Great Sex Scandal covers the 1912 scandal in depth. Unfortunately it is not in publication, but is available at Oregon Historical Society library. 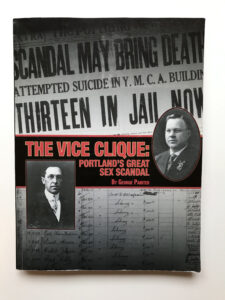 After the trials that resulted from the Portland, Oregon, scandal, the definition of “sodomy” was expanded to include almost anything that was not the heterosexual missionary position. In 1923, when Medicine For The Blues is set, eugenics laws passed the Oregon legislature, mandating sterilization for “sexual deviants.” Over the years the majority of men sterilized in Oregon were castrated. The eugenics sterilization laws remained on the books until 1983 and during that time some 2500 people were coerced into sterilization. In 2002 Oregon Governor John Kitzhaber issued a formal apology to those who had been sterilized.

With Hallowe’en and the Day of the Dead upon us, be careful of running into vampires. They may turn you into a homosexual. Oh, the horror! (wink.) 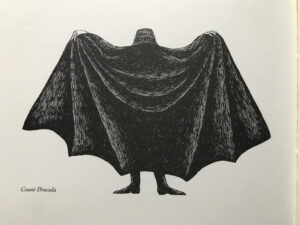