Hooray for Dystopias!…Are we living one? 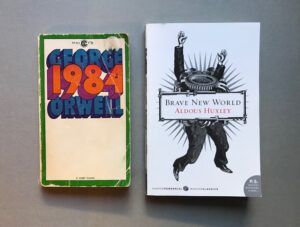 As portrayed in Medicine For The Blues, fear and intimidation were tools of the KKK in the 1920s as they attempted to create a homogeneous society, but nothing on the scale of 1984 (published in 1949) and Brave New World (1932).

Too much has been written about these two classics of dystopian literature for me to repeat, except to say they are dire warnings. Every adult should read them, even though they are deeply disturbing, especially Orwell. He is such a good writer, because he understands so well, and so clearly describes, the logistics of the 1984 world, and he understands the logistics of Winston Smith’s mind and thoughts, his memories and dreams.

In the world of Big Brother surveillance and torture are the tools of domination to achieve a stable society. Brave New World paints a very different society, where “happiness” is the means of creating a stable society, by means of genetic manipulation, mental conditioning, drugs, and more scientific tools. I find Orwell’s book more powerful, largely because he is a better writer.

Discussions of both books reference Dostoyevsky’s Grand Inquisitor—that is to say, for many people freedom is too much of a responsibility and they would rather not be bothered, so they readily submit to domination.

The contemporary USA is not free from aspects of both these books. 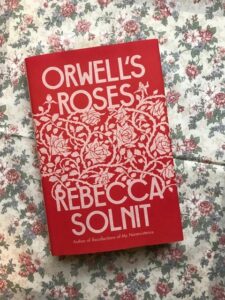 In Orwell’s Roses by Rebecca Solnit (2021) she writes:

“Behind that is the question of how much he lied to himself while he forced everyone around him to lie about everything. Did he lose sight of the falsity as he commanded the nation to obey his dictates? What did it mean to be the enforcer of lies, to prop up illusions and conceal brutal realities, to demand obedience to a version of reality that was a result of your orders and suppressions rather than the data?”

Solnit is not talking about Trump but Stalin.

“Orwell wrote in 1944, ‘The really frightening thing about totalitarianism is not that it commits ‘atrocities’ but that it attacks the concept of objective truth…’”

We can thank the Trump administration and Kellyanne Conway for ushering in the era of “alternative facts.”

(And when you read 1984, don’t skip the appendix “The Principles of Newspeak.” It’s as terrifying as the rest of the book.) 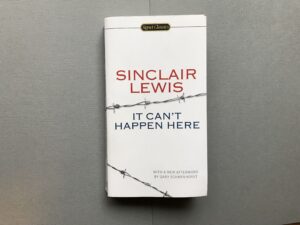 It Can’t Happen Here by Sinclair Lewis is another dystopian, cautionary tale.

After reading 1984 and Brave New World, it seemed to me that It Can’t Happen Here (1935) by Sinclair Lewis was the next thing to tackle.

The 2005 “Introduction” by Michael Meyer says that contemporary readers may find the book difficult and points to “the book’s deep topical nature. The novel is a kind of Sears, Roebuck catalogue of early 1930s American political figures, events, and movements…” Also it is written in Lewis’s peculiar prose style of the times, with syntax, phrasing, and vocabulary that may feel foreign to today’s readers. In addition, he seems throughout the book to be showing off his erudition, which is prodigious.

The novel is, in my mind, a kind of Babbitt on steroids. In that book Lewis skewers the smug and mentally torpid American middle class; here he claims the rise of fascism in the US is the fault of “all the conscientious, respectable, lazy-minded Doremus Jessups [his main character] who let the demagogues wriggle in without fierce enough protest.”

It was criticized by many at its publication for its lack of literary quality, including, among other things, its “heavy-handed satire and irony,” but praised as “a vigorous anti-fascist tract” even if it was “not much of an novel” (quoting Malcolm Cowley in the 2014 “Afterword.”)

This warning that fascism CAN happen here is the strength of this book for today. Its depiction of the legally elected president Buzz Windrip, who quickly becomes a dictator, is so Trumpian in so many respects that one wonders how Lewis saw so clearly that such a person could be elected president eighty years later.

A few examples. Windrip says, “We ought to keep all these foreigners out of the country, and what I mean, the Kikes just as much as the Wops and Hunkies and Chinks.” And Windrip “advocated everyone’s getting rich by just voting to be rich.” Jessup “could not explain [Windrip’s] power of bewitching whole audiences…[Windrip] was vulgar, almost illiterate, a public liar easily detected, and in his ‘ideas’ almost idiotic….But below this surface stagecraft was his uncommon natural ability to be authentically excited by and with his audience, and they by and with him.”

Jessup says, “Wait till Buzz takes charge of us. A real Fascist dictatorship!”
His wealthy fellow townsman answers, “That can’t happen here in America, not possibly! We are a country of freemen.”
“The answer to that…is ‘the hell it can’t! Why there’s no country in the world that can get more hysterical—yes, or more obsequious!—than America.” Then Jessup goes on to give a full page of examples to back up his assertion.

Other dystopian novels are set in the future or in distant or imaginary societies, so they seem rather improbable here. But because It Can’t Happen Here is set in the USA, it makes it much easier to imagine the possibility that it CAN.

We are lucky that we have been able to remove Trump from office legally. We still have a democratic republic, but only “if we can keep it” as Benjamin Franklin is to have said, so famously.