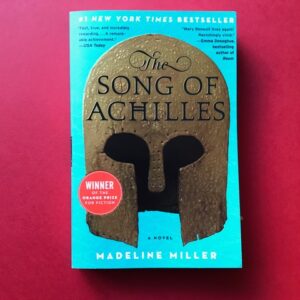 Madeline Miller’s Song of Achilles deals with the relationship between Achilles & Patroclus in Greek mythology.

I was interested in male friendships in Homer’s Iliad, when I bought a copy of Madeline Miller’s recent bestseller The Song of Achilles, but I challenged myself to first read The Iliad of Homer. (I’ve long held a paperback copy of Richmond Lattimore’s celebrated 1951 English translation.)

With present-day war in Ukraine, it’s appropriate to study some ancient history of human warfare, specifically in Troy, located just south of Ukraine across the Black Sea on the western shore of modern Turkey.

Homer’s Iliad covers only a slice of the Greek myth, a few months in the tenth year of the Trojan War, starting with the angry break between Achilles and Agamemnon, and ending with Achilles releasing the body of Hector to Priam for a proper funeral and the subsequent grieving.

Madeline Miller’s The Song of Achilles covers the youth of Patroclus, his love for Achilles, and follows them through the buildup and the whole Trojan War, including the burial of Achilles and Patroclus together in the same grave, and beyond. 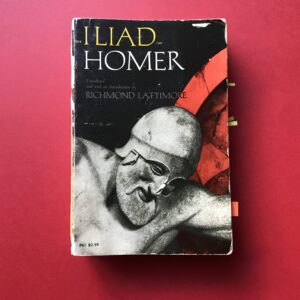 Some passages of the Iliad can be as challenging to the modern reader as the Biblical “begats.” There are lists of all the Greeks who sailed off to Troy, including where they came from, their lineages, and the number of ships they sent. And there are seemingly endless battle scenes that tell the names of all the heroes killed, where they came from, and who their families were. And there are the famous repeated formulas.

Speaking of these formulaic aspects of Homer’s epic, Lattimore writes, “[Homer] did not make this style, he used it. It needs no defense. Padded, adjectival, leisurely, routine, it works.”

Accordingly, I found Homer’s overall pacing to pull the reader along as the story unfolds.

And in spite of the foreignness of Homer’s language for the modern reader, his thoughts and descriptions are exceedingly relevant for us today. Because politics is an inevitable element of any war, the Iliad speaks to the delusion and hatred in our current politics. Here are two examples:

Agamemnon, in welcoming Achilles’s return to battle, acknowledges his own delusion:

Delusion is the elder daughter of Zeus, the accursed
who deludes all; her feet are delicate and they step not
on the firm earth, but she walks the air above men’s heads
and leads them astray. She has entangled others before me.

As the Greeks and Trojans meet in battle, this passage depicts the nature of hate:

Ares drove these on, and the Achaians grey-eyed Athene,
and Terror drove them, and Fear, and Hate whose wrath is relentless,
she the sister and companion of murderous Ares,
she who is only a little thing at the first, but thereafter
grows until she strides on the earth with her head striking heaven.

Variations in the Myths 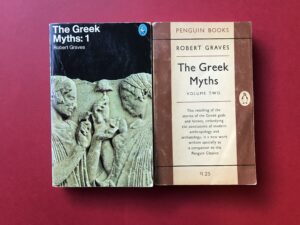 Miller fills in many details of the story of Patroclus and Achilles which are not included in the Iliad. To get yet another angle on the story, I also consulted Robert Graves’s The Greek Myths, Volume 2, 1955. While Graves mentions in passing that Patroclus is one of the many suitors for the young Helen, he fails to note that Patroclus was only nine years old at that time, a fact made clear in Miller’s description, although she may have adjusted his age for her story. In portraying this scene, she gives a vivid impression of the many Greek kings and princes, gathered to seek Helen’s hand, as a bunch of brawling competitors for glory and fortune. This falls precisely in line with Lattimore’s contention in his introduction to the Iliad about the historical origin of the story: “Personally, I think it was a viking-raid, or several such combined into one.”

I first dipped into Graves’s Myths in research for Medicine for the Blues trilogy, which borrows from Greek mythology. The trilogy also tells Dr. Carl Holman’s backstory in WWI when he meets his brother-in-arms and first great love, Gerald, who is killed during the occupation of Germany.

While Graves may have left out this one detail about Patroclus’s age, mentioned above, he gives us exhaustive material on variations of the myths and stories told by different Greek chroniclers. He often follows a narrative with phrases like “but some say…” or “some believe…” or “according to a third account…” etc. So Miller is perhaps justified in including things in her tale that are not part of the familiar, accepted myths.

A case in point is the relationship between Achilles and Patroclus. Madeline Miller depicts in some detail that Patroclus and Achilles were lovers. In my reading of the Iliad, I found no such indication. There is even a suggestion that they both slept with women in their tents at night.

But in Miller’s telling she writes that in his youth Achilles tells his father, “I forgot to say I wished him [Patroclus] for a companion,” followed by Patroclus’s first person narration saying, “Therapon was the word he used. A brother-in-arms sworn to a prince by blood oaths and love. In war, these men were his honor guard; in peace, his closest advisers.” 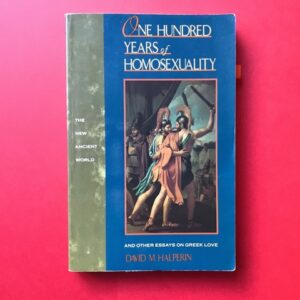 100 Years of Homosexuality by David Halperin gives examples of male friendships in Homer’s Iliad and elsewhere.

This issue is explored by David M. Halperin in his essay “Heroes and their Pals” from One Hundred Years of Homosexuality, and other essays on Greek love, 1990. He points out that in the traditional myths, Patroclus is older than Achilles, but an exiled prince and thus lower in rank. Miller depicts the two young men as close in age. Halperin writes:

Thus, the asymmetry in the relations between Achilles and Patroclus has been taken, plausibly enough, by Gregory Nagy to point to the traditional social configuration on which their friendship is modeled—namely, the relation between a hero and his retainer or therapon…W. Thomas MacCary has noted conventional elements in the relations between Homeric heroes and their charioteers which also seem to parallel the friendship between Achilles and Patroclus.

The high pitch of feeling evident in the relation between Achilles and Patroclus has led scholars to argue interminably about whether their romance was a sexual as well as a comradely one—despite Homer’s failure to describe any sexual contact between them. The question has been further complicated by the testimony of the classical Greeks [some 3-400 years after Homer lived], who, looking at the love of Achilles and Patroclus from the perspective of their own social and emotional institutions, tended naturally to assume that the relation between the heroes was a paederastic one. According to the Attic orator Aeschines [389–314 BC], for example, Homer did not bother to describe the love-affair more explicitly because “he considered that the extraordinary degree of their good will towards one another would be self-explanatory to those among the audience who were cultivated people.”…But if later Greeks could agree (and they could not all agree) that Achilles and Patroclus were a paederastic couple, they had more difficulty deciding who played which role in the relationship.

And in conclusion he states:

So long as we, too, continue to read the Iliad in the light of later Greek cultures—to say nothing of modern sexual categories—we shall continue to have trouble bringing the friendship between Achilles and Patroclus into sharper focus. The thrust of my analysis has been to remove the relationship from the classical Greek context, to which it does not properly belong, and to insert it instead into the context of an earlier narrative pattern, know largely from surviving Near Eastern texts, concerning heroes and their pals.

These texts are the Epic of Gilgamesh and the Biblical story of David and Jonathan, texts Halperin interprets as coming from a historical period more or less contemporaneous with the Iliad. His phrase “to say nothing of modern sexual categories,” admonishing modern readers not to project our own understandings on such an ancient text, is key. 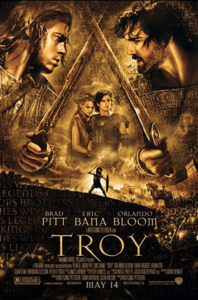 Following up on these readings, I watched the 2004 movie Troy directed by Wolfgang Petersen and starring Brad Pitt. That retelling includes the buildup of the war through the sacking of Troy. But David Benioff’s screenplay does some serious violence to the traditional narrative. In the movie, Achilles lives to participate in the sacking of Troy, and there Agamemnon is killed by Briseis; whereas in the Iliad, Achilles is killed before the Trojan horse incident that leads to the fall of the city (an incident not included in the Iliad), and if Agamemnon dies at Troy, then the whole of the Oresteia is obviated. Yet, referring back to Robert Graves repeated observation of multiple variants of the myths, this will be the early 21st century Hollywood version of the story. After all, with a star like Brad Pitt you can’t have him making love with Patroclus, but instead Briseis becomes his love interest, and Pitt can’t die before Troy is captured. So much for Hollywood. 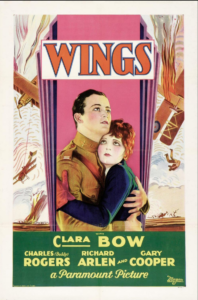 An aside: At the same time, I also watched director William Wellman’s 1927 silent movie Wings about the air battles of WWI—the era of Medicine for the Blues. It won the first Academy Award in 1929 for Best Picture and Best Effects. I didn’t know what I was in for when I chose to watch this film. Even lacking sound and color (although there is some innovative hand tinting of flames), Wings is spectacular, equal to the recent Oscar-winning WWI film 1917 directed by Sam Mendes (2019). Wings tells the story of another pair of brothers-in-arms, one of whom dies in battle and is grievously mourned by his companion.

The “Special Features” on the DVDs of both Troy and Wings are fascinating. In both productions, no stunt men were uses in crucial scenes. In the final fight between Achilles and Hector, actors Brad Pitt and Eric Bana did all the fighting themselves. In Wings, the close shots of the actors in their planes were filmed in the air with the actors piloting themselves. It’s questionable whether that movie could be made today.

In a 2011 New Yorker article, three English translations of Homer’s Iliad are compared. Richmond Lattimore’s (mentioned above) seems the favorite for modern readers, with Robert Fagles’s 1990 version a close second. Last comes Stephen Mitchell’s. But the article ends with high praise for Alexander Pope’s translation of the Iliad, published in 1720, stating, “Many consider it the greatest English Iliad, and one of the greatest translations of any work into English.”