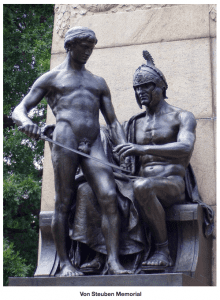 It is not unusual for young military men to form intense emotional relationships, perhaps at times sexual. Some combination of youth, fear, camaraderie, lack of contact with women, separation from familiar environs, male bonding, and young male hormones might play a part. Whether these friendships can be considered “homosexual” attachments in the modern sense of the term is debatable. But there is ample evidence that these associations existed. In the case of Baron Friedrich von Steuben who fought with the Continental Army against the British in the America Revolutionary War, we see a life-long pattern of such relationships.

Von Steuben was born in Germany in 1730 and joined the Prussian army at the age of 17. After serving several years in various military campaigns he became an aide-de-camp to Frederick the Great and in 1762 was one of a small group of officers chosen for special training by this renowned Prussian monarch and military leader. Besides attracting scientists, artists, and writers from across Europe, Frederick’s court had the reputation for homoerotic tastes and celebration of ancient Greek culture. Frederick appeared indifferent to his wife and rarely saw her.

After von Steuben lost his post in 1777, he was accused by an acquaintance of “having taken familiarities with young men which the laws forbid and punish severely.” That year von Steuben went to Paris looking for work and his military background came to the attention of Benjamin Franklin, the American minister to France. It is likely that rumors of von Steuben’s sexual proclivities were known to Franklin, and the Prussian officer must have seen that his reputation limited his opportunities in Europe. This was the winter of Valley Forge and General George Washington disregarded the rumors in favor of von Steuben’s Prussian military training and welcomed him into the Continental Army as temporary inspector general.

Service in the American Revolution

Von Steuben went to work reorganizing the camp layout “to have rows for command, officers, and enlisted men. Kitchens and latrines were on opposite sides of the camp, with latrines on the downhill side.” (Wikipedia) This model for camp layout and sanitation standards were in use a hundred and fifty years later.

To combat graft and corruption in military supplies, von Steuben instigated strict record keeping and his inspections saved the army the loss of thousands of muskets. In his first year of service, he authored the Regulations for the Order and Discipline of Troops of the United States based on the training program he devised at Valley Forge—regulations that remained in use until 1814.

Von Steuben spoke little English, and his French brought him into contact with Washington’s aides-de-camp, Alexander Hamilton and John Laurens, both bilingual, who translated the French into English for each day’s training exercises.

Hamilton at this time was an inseparable from John Laurens. Later in the war they exchanged letters that evidence a deep emotional relationship, one letter stating, “I wish, my dear Laurens, that it might be in my power, by action, rather than words, to convince you that I love you.”

Jonathan Ned Katz cautions: “A number of the present documents of loving involve problems of historical interpretation because it is difficult to know at a later date what feelings and behavior are implied by an earlier era’s manner of speech. For example, the loving letters of Alexander Hamilton to John Laurens present the dilemma of interpreting to what extent his epistolary language is a mere formal, literary convention and to what extent it is an honest expression of emotion, referring to some deep-felt, perhaps physical relation.” (Gay American History)

Ron Chernow, author of the biography on which the stage musical Hamilton was based, agrees: “Because the style of eighteenth-century letters could be quite florid, even between men, one must tread gingerly in approaching this matter…” But he goes on to note how often the word “feminine” was used to describe Hamilton. When Hamilton’s son was preparing an authorized biography of his father, he omitted a page that describes the Laurens-Hamilton friendship as “a deep fondness of friendship, which approached the tenderness of feminine attachment.” Chernow continues, “In all thirteen colonies, sodomy had been a capital offense so if Hamilton and Laurens did become lovers—and it is impossible to say this with any certainty—they would have taken extraordinary precautions.” (Chernow, Alexander Hamilton)

It is worth noting here, another entry in Katz’s monumental Gay American History. In 1776 Thomas Jefferson along with others, revised the Virginia criminal code to punish sodomy by castration instead of death. Curiously, the punishment for women convicted of sodomy was “by cutting throu’ the cartilage of her nose a hole of one half inch in diameter at the least.”

Erin Blakemore tells of a particularly rowdy party thrown by von Steuben at Valley Forge, reported by the aide-de-camp Pierre-Étienne Du Ponceau: “ ‘His aides invited a number of young officers to dine at our quarters…on condition that none should be admitted, that had on a whole pair of breeches.’ The men dined in torn clothing and, he implied, no clothing at all.” (History.com)

Valley Forge is also where von Steuben met the American soldiers William North and Benjamin Walker, who may have been involved in their own “romantic friendship” as well. (History.com) Upon seeing Walker for the first time, von Steuben is reported to have said, “If I had seen an angel from Heaven I should not have more rejoiced.” (Wikipedia) Walker and North became von Steuben’s aides-de-camp and developed a long-time close relationship with him.

In a time when homosexual men could not even consider marriage, they sometimes used adoption to form legal bonds. After the war Von Steuben, some 20 years older than North and Walker, adopted them as surrogate sons and North tried to manage von Steuben’s troubled finances. “We love him,” North wrote, “and he deserves it for he loves us tenderly.” (History.com) North eventually, married, and served for a time as a US senator. Walker later becoming a representative in the US Congress.

Another young man, John Mulligan, wrote to von Steuben for help in 1791. Mulligan was in a close relationship with Charles Adams, son of John Adams, the US vice president at the time. Concerned about the closeness of this relationship, the vice president demanded that the two young men part company. Von Steuben invited the couple into his home. They both lived with him for a time, until the younger Adams departed. Mulligan stayed on with von Steuben as a companion and secretary through to the end of von Steuben’s life.

After von Steuben’s death in 1794, Mulligan inherited his extensive library and map collection along with a substantial sum of money. The rest of Von Steuben’s estate went to William North who distributed it among his military comrades.

A statue of von Steuben stands in Lafayette Square Park in Washington, DC, once a popular gay cruising area before the police sweeps of the Lavender Scare in the early 1950s. The base of the statue honors von Steuben’s close friends with a medallion that reads,“Colonel William North—Major Benjamin Walker—Aides and Friends of Von Steuben.” The sides of the monument depict helmeted Roman soldiers, one of them instructing a naked youth who holds a sword (photo above).

The Huffington Post article about von Steuben concludes as follows:

“Many historians consider von Steuben to be one of the indispensable heroes of the American Revolution. His ideas and techniques remained U.S. military orthodoxy for decades after his death. Nevertheless, because American revolutionary-mythology cannot assimilate the dual anomalies of foreignness and gayness, most Americans have never heard of him.”

We must also remember Deborah Sampson, who dressed in men’s clothes and enlisted in the Continental Army in 1782. She served for a year and a half and was wounded twice before her secret was discovered. Still she was given an honorable discharge and later a government pension for her service. Jonathan Ned Katz reports that there are suggestions that Sampson may have had close relationships with other women, but she did later marry a man and bore three children.