Despite vast differences spanning some 400 years, the 17th century was in some ways like today in the 21st century.  Kings and aristocrats, lower class male youth, and pirates all seemed to accept homosexual acts without the extreme aversion characteristic of the mid-20th century.  Gay pirates, or rather 17th century pirates who participated in male-male sexual acts, were not an unusual phenomenon.

I recently read Robert Louis Stevenson’s Treasure Island (1883) for the first time.  I should have read it as a boy.  All the same, it is a treat. 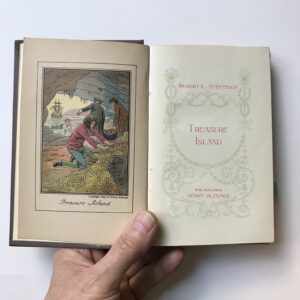 In spite of his 19th century prose and the peculiar dialect of some of the dialogue, Stevenson is very lucid in telling his tale.  At first I was perturbed that the upright Captain Smollett has not been better remembered than the deceitful and manipulative Long John Silver.  But one must admit that on top of Silver’s physical appearance with one leg missing and a parrot perched on his shoulder, his psychological dexterity in calculating his advantage in shifting circumstances makes him the most interesting character in the story.  This is often the case with the villain in the plot.

It is commonly assumed that libidinous relations develop between seafaring men.  But while Long John Silver does seem to hold genuine affection for the clever boy John Hawkins, who narrates the tale, I don’t detect any sexual overtones in their perilous relationship.  Nor does there seem to be any hint of carnal bonds between any of the sailors and pirates, who are indeed often at each other’s throats.

Upon finishing this classic novel, I was drawn to take up a book that has long languished on a shelf in my library: Sodomy and the Pirate Tradition, English Sea Rovers in the Seventeenth-Century Caribbean by B. R. Burg (1983), which analyzes the probability of communities of gay pirates.  Here I use the 20th century term “gay” advisedly—as shorthand for same-sex activity—the reason Burg chooses instead to use the term “sodomy.”    Although academic and scholarly, the book is fascinating. 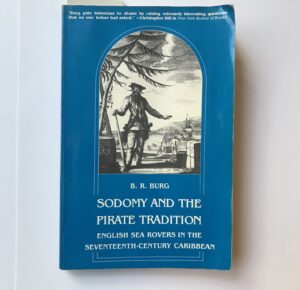 book cover, Sodomy and the Pirate Tradition, English Sea Rovers in the Seventeenth-Century Caribbean, by B. R. Burg (1983)

Burg begins by making it clear that homosexual acts were not so looked down upon as they have been in recent decades in America and the United Kingdom.  Although there were laws on the books punishing such dalliances with death in England of the 1600s, few prosecutions were brought.  When the rare case was tried, it was usually a pretext for an enemy in high places to get rid of a rival or a source of annoyance.

Another indication that homosexual relations were casually overlooked is that James I, who reigned from 1603 to 1625 (yes, he of the King James Bible translation), was widely known to have had a series of boyfriends.  In footnoting this fact, Burg references A. L. Rowse’s Homosexuals in History (1977), another book that has been languishing on my shelf. 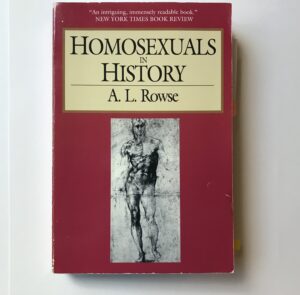 In Rowse’s chapter “Francis Bacon and the Court of James I,” he goes into considerable intimate detail about James’s proclivity over the years of his reign.  At age thirteen James began a relationship with his French cousin, Esmé Stuart, Lord of Aubigny, some twenty years his senior. After Esmé was exiled for political reasons, James became King of England and took up with a fellow Scotsman, James Hay.  Then once Hay married in 1607, Robert Carr became the gentleman of the Bedchamber. Again the King’s boy eventually married and the next to take his place was George Villiers, an Englishman of good family.  Throughout these changes, various intrigues abounded. 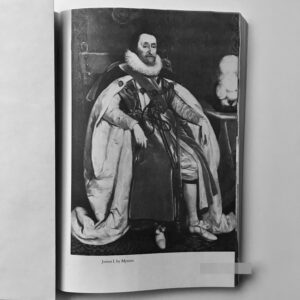 black & white photo of a painting of James the first, illustration in the Rowse book

Toward the end of his reign, James promoted his friend the writer Francis Bacon to Lord Chancellor, where he served ably.  As the title of Rowse’s chapter suggests, Francis Bacon also had a liking for male companions: “A Parliamentarian diarist tells us that [Bacon] ‘would not relinquish the practice of his most horrible and secret sin, keeping still one Goderick, a very effeminate youth, to be his catamite and bed-fellow.  Nor did he ever, that I could hear, forbear his old custom of making his servants his bedfellows.’”  One might glean such an intimation from Bacon’s essay “Of Marriage and Single Life.” A couple of excerpts:

“Unmarried men are best friends, best masters, best servants, but not always best subjects, for they are light to run away, and almost all fugitives are of that condition.”

“But yet he was reputed one of the wise men that made answer to the question when a man should marry: ‘A young man not yet, an elder man not at all.’” [quoting Thales of Greece.]

After only a few years, however, political enemies sought to bring Francis Bacon down.  At first he fought the charges.  Rowse writes, “Public opinion at the time thought that a charge of sodomy might well be brought—the kind of anthropological blackmail with which we have been familiarized in our time.  The king and Buckingham [Villiers] could not allow that sacred issue to come into the open; Bacon had to give way completely, and give up.”  In the end he was charged with corruption, acts which were largely attributable to Bacon’s underlings.

After his fall from grace, Bacon was able to return to his main interest and his greatest talent, writing and intellectual pursuits—for which he is famously remembered today.

(Needless to say, throughout history many other aristocrats were known to be gay, notably Baron Friedrich von Steuben who fought with the Continental Army against the British in the American Revolutionary War.)

All this is to show that for the most part, homosexual activity in 1600s England was taken little notice of.  But these were the doings of the aristocracy and the wealthy.  Burg goes on to describe the great number of lower class young boys and men who were forced from their parental homes into apprenticeships, farm labor, and servant jobs, which often were so onerous that youths ran away to join increasingly large and dangerous vagrant bands.  Burg suggests that in such all-male social groupings, homosexual activity was common.  Next, as one might expect, many of these youngsters ended up in the merchant marine employ or involuntarily pressed into the British navy, which especially in time of war was always in need of additional deck hands.

From here, one can see where Burg is heading: the Caribbean and the all-male buccaneer communities.  These outcast societies, far from their homeland, and rejecting the manners and restrictions of civilized life, were free to indulge in sexuality as it was available to them.  So Burg surmises that the phenomenon of gay pirates was not uncommon.  What I have taken away from Burg’s writing is that homosexuality was pretty much normalized in the various contexts that he describes and was largely unworthy of comment.

It is interesting that, since the time of his writing, much has changed in the acceptance of homosexual acts and relationships in the USA and the UK.  In 1983 Burg could write, “Unlike the present day, when sexual contact between members of the same sex is anathema to large segments of the population in both England and America, homosexuality was regarded with much less opprobrium in the seventeenth century.”  With the recent overturning of anti-sodomy laws and the acceptance of gay marriage, contemporary attitudes are much closer to those of the 17th century, when homosexual relations were more or less accepted as one more variant of sexual behavior.