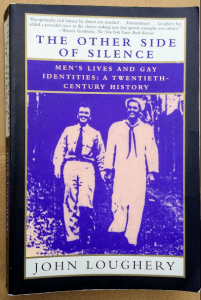 The Other Side of Silence by John Loughery

In observance of LGBTQ+ history month, I want to talk about some of the books that were instrumental in helping me understand the gay world of the 1920s as portrayed in Medicine for the Blues. I encourage anyone interested in gay history to check out some of these works.

Katz’s two massive compendia of source materials recording LGBTQ history were essential in helping me see how much queer activity was going on in the early 20th century. The stories about Bessie Smith and her chorus girls are particularly enticing.

I could not have written my trilogy without the extensive research done by Peter Boag. He describes the different roles and types of gay men operating in different social milieux of early 20th century: for example, the punks and jockers who worked in logging, mining, and agricultural settings; versus the fairies and queens, the dandies, who inhabited urban scenes.

Chauncey’s book is another revelation. He gives a robust chronicle of early gay life in New York City, most surprisingly the male bathhouses that attracted men looking for sex with other men.

Faderman’s work helped me flesh out what life might have been like for lesbian women in the 1920s. In my trilogy the discussion with Gwen and Charlie, about such relationships, when Carl first introduces Jimmy to these characters, comes from passages in these books.

* Lillian Faderman: Surpassing the Love of Men, romantic friendship and love between women from the Renaissance to the present, 1981

Loughery’s was the first book I ran across that talked about 20th century gay history. Although his early chapters covering the 1920s make up less than 50 pages, he showed me that there was much to explore in developing my understanding of 20s gay life.

* John Loughery, The Other Side of Silence, men’s lives and gay identities: a twentieth-century history, 1998

Jeb and Dash is a heartbreaking true story about unrequited love, but it gives first-hand accounts of gay men’s activities in Washington, DC, during the “Roaring Twenties.”

Although published in 1974, this was an excellent introduction for me about the early “homophile” rights movement in Europe. It gave me ample background for Carl Holman’s experiences in Germany during the US occupation after WWI.

Actor Haines lived from 1900 to 1973. I found the early parts of this book especially enlightening about how openly gay the 15-year-old Billy must have been in a small Virginia boom town during WWI, after he ran away from home with his “boyfriend.”

These novels were eye opening. I hardly imagined that the subject of homosexual relations would be treated so openly in these early works. But there is much presented in these books that shows how one could walk the line between openness and staying in the closet, both in public and in private. It was surprising to me to find such an clearly homosexual character in Sinclair Lewis’s best selling novel Main Street and in Sherwood Anderson’s famous short story “Hands” in Winesburg, Ohio. Fuller’s novel is curiously casual, humorous, and slyly open about its gay relationships—a real delight of a novel that I believe holds up well even today. Last, I will mention William Maxwell’s The Folded Leaf (1945) because it is so touching and so well written. He is a master well worth reading. He died in the year 2000 but continued to publish through the 20th century.

Although Isherwood’s chronicle covers a somewhat later period than Medicine for the Blues, his frank account of his life in Berlin is bracing. “It was Berlin itself he [young Christopher] was hungry to meet; the Berlin Wystan [his friend W. H. Auden] had promised him. To Christopher, Berlin meant Boys.” Carl Holman’s story could not have unfolded without my reading of this book.