Legislative restrictions on teaching science and history can lead to anti-science attitudes and racism in voting laws. 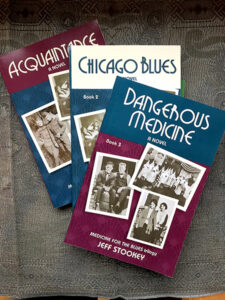 In my Medicine For The Blues trilogy I tried to give a full picture of the era of the early 1920s by including details about many aspects of the times: political, social, scientific, artistic, and religious.

In Chapter 2 of Acquaintance, Book 1, when Carl Holman and Gwen Cook meet for a lecture on eugenics, she is reading William Jennings Bryan’s book In His Image. She says, “I was mainly interested in it because of that Kentucky statute last year…the one that tried to ban teaching Darwin in the public schools….it was defeated in their legislature by just one vote. In spite of Bryan’s support.” This scene is set in May of 1923, two years before the Scopes trial.

Much later, in the Epilogue to Dangerous Medicine, Book 3, Carl writes this:

“During the summer of 1925, the nation’s attention was riveted on the Scopes ‘monkey’ trial in Tennessee. Clarence Darrow and William Jennings Bryan argued the subject of evolution during the long hot days of July. Darrow’s scientific witnesses were not permitted to testify before the jury, and in the end John Scopes was convicted of teaching evolution and fined 100 dollars. Later the Tennessee State Supreme Court upheld the law forbidding the teaching of any theory denying the divine creation of man.”

These two incidents of anti-science legislation are based on historical facts. 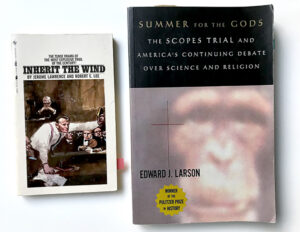 Opposing science and its teaching are not new (take for example the Catholic Church versus Galileo in the early 1600s), and such attitudes were prominent in public debate in the 1920s.

An article for Boston Review titled “How Americans Came to Distrust Science” by Andrew Jewett (reference below), states this:
“The hedonistic tenor of the 1920s consumer culture and the violations of sexual propriety by Jazz Age youth also signaled to some critics a widespread loss of moral guideposts. Above all else, however, loomed the popular vogue of psychology, with its emphasis on cultural conditioning, childhood traumas, and other nonmoral, non-rational causes of behavior. The post–World War I years witnessed an explosion of popular interest in all of the natural and social sciences. But psychology became a veritable craze, with millions of readers devouring popular treatments and applying the new interpretive categories to themselves and others. Small cadres of literary scholars, southern writers, and mainline Protestants, along with larger groups of Catholic leaders and conservative Protestants, connected the vogue of psychology to wider social and cultural changes. They identified science as the source of a dangerously amoral worldview that had captured the public mind and eroded society’s cultural foundations. These critics of the 1920s levied a charge that would become increasingly common in subsequent decades: modern science had dissolved conventional understandings of the human person and led the entire culture astray.”

Medicine For The Blues reflects the influence of Freud and the popular vogue for psychoanalysis, as well as aspects of the varying religious views in the 1920s. And Darwin’s theory of evolution is a significant backdrop for my early 20th century story.

“The Fight to Keep Evolution Out of Schools”—the title of a 2018 article by Gordon Emmett Hall and Shirley Andrea Woika in The American Biology Teacher (reference below)—is still very much with us, as is the white supremacy of the Ku Klux Klan which was a consequential element of the 1920s and of my trilogy.

Hall and Woika write:
“Kentucky still has a law on the books, originally enacted in 1976, authorizing teachers in the state’s public schools to present Biblical creationism and for students to get credit on exams if they give answers consistent with that instruction. Two additional states, Louisiana and Tennessee, have passed legislation in 2008 and 2012, respectively, that encourage teachers to discuss scientific evidence critical of evolution….
Anti-evolution legislation continues to be introduced in state legislature on a regular basis. In January 2015 alone, a total of five anti-evolution bills were introduced across the nation. These included Missouri’s House Bill 486, Indiana’s Senate Bill 562, Oklahoma’s Senate Bill 665, South Dakota’s Senate Bill 114, and Montana’s House Bill 321. To date in 2016, similar legislation was introduced in Florida, Idaho, Mississippi (where there is already a similar law about the origin of life, and not evolution, specifically), Oklahoma, South Dakota, and Tennessee.”
Note that in Tennessee, where the Scopes trial took place, evolution is still an issue.

Skepticism of science remains an issue in contemporary society.

In August of 2021, many of the states where anti-science legislation is being pushed now experience an alarming rise of COVID-19 infections and hospitalizations. And it is significant that those getting infected are the large portion of the population in those states who have declined to receive scientifically proven vaccines.

There is, however, another even more troubling trend in the air. In many of these same states, legislation is being passed prohibiting the teaching of slavery in America. Timothy Snyder writes about this in his New York Times Magazine article “The War on History Is a War on Democracy” (reference below). He makes a number of complex arguments there, which I encourage everyone to read. But here I want to highlight one line of thought that he follows. This is difficult to summarize, so I will let Snyder speak for himself by quoting extended excerpts of his essay.

[In 2009 the Russian president Dmitri] “Medvedev established the Presidential Commission of the Russian Federation to Counter Attempts to Falsify History to the Detriment of Russia’s Interests, a panel of politicians, military officials and state-approved historians ostensibly tasked with defending the official history of the Soviet Union’s role in World War II. It did little in practice, but it did establish an important principle: that history was what served Russia’s national interests, and that all else was revisionism….These Russian policies belong to a growing international body of what are called ‘memory laws’: government actions designed to guide public interpretation of the past.”
….
Last November [2020]…the American president, Donald Trump, created the President’s Advisory 1776 Commission. Its “1776 Report,”…defined its task as the “restoration of American education.” The report responded to the 1619 Project, an attempt to bring the history of slavery closer to the center of national narratives…The commission’s report reproduced the structure of Russian memory policy, acknowledging a historical evil and then relativizing it in a shocking manner. Slavery was discussed, but only as one among numerous ‘challenges to America’s principles,’….Slavery’s practice in America was defined as a “denial of core American principles” and “the attempted substitution of a theory of group rights in their place”—which, the authors contend, “are the direct ancestors of some of the destructive theories that today divide our people and tear at the fabric of our country.”
The allusion to “group rights” seems to be a reference to Critical Race Theory: a set of decades-old arguments about how racism works in law and society that has recently become a fixation of Republican politicians.
….
This spring, memory laws arrived in America. Republican state legislators proposed dozens of bills designed to guide and control American understanding of the past. As of this writing, five states (Idaho, Iowa, Tennessee, Texas and Oklahoma) have passed laws that direct and restrict discussions of history in classrooms. The Department of Education of a sixth (Florida) has passed guidelines with the same effect. Another 12 state legislatures are still considering memory laws.
….
But the most common feature among the laws, and the one most familiar to a student of repressive memory laws elsewhere in the world, is their attention to feelings. Four of five of them, in almost identical language, proscribe any curricular activities that would give rise to “discomfort, guilt, anguish or any other form of psychological distress on account of the individual’s race or sex.”
History is not therapy, and discomfort is part of growing up.
….
The memory laws arise in a moment of cultural panic when national politicians are suddenly railing against “revisionist” teachings. In Russia, the supposed revisionists are people who write critically about Stalin, or honestly about the Second World War. In the United States, the “revisionists” are people who write about race. In both cases, “revisionism” tends to mean the parts of history that challenge leaders’ sense of righteousness or make their supporters uncomfortable.
….
We know where it [the system of anti-Semitism in Germany and Austria] led. Jews were excluded from the vote and from the professions. They were separated from their property, and from their homes, and from their lives.
….
A student of Eastern and Central European history can see in the events of May 31 and June 1, 1921, in Tulsa, Oklahoma, a certain resemblance to what happened in Austria—although the violence in America was more concentrated.
….
On that spring day, white Tulsans entered and destroyed Greenwood, burning buildings and murdering Black citizens on a large scale. They were supported by some police officers. Afterward, as in Vienna, property relations were forever altered, which had an impalpable but unmistakable effect on attitudes.
….
In Tulsa, the local press ceased to mention the events. Documents concerning the massacre vanished from state archives. Oklahoma history textbooks had nothing to say. Young Tulsans and Oklahomans were denied the chance to think about their own history for themselves. Silence prevailed for decades.
A hundred years after the Tulsa massacre, almost to the day, the Oklahoma Legislature passed its memory law. Oklahoman educational institutions are now forbidden to follow practices in which “any individual should feel discomfort, guilt, anguish or any other form of psychological distress” on any issue related to race.
….
In most cases, the new American memory laws have been passed by state legislatures that, in the same session, have passed laws designed to make voting more difficult. The memory management enables the voter suppression. The history of denying Black people the vote is shameful. This means that it is less likely to be taught where teachers are mandated to protect young people from feeling shame.
….
Trying to shield young people from guilt prevents them from seeing history for what it was and becoming the citizens that they might be. Part of becoming an adult is seeing your life in its broader settings. Only that process enables a sense of responsibility that, in its turn, activates thought about the future.
Democracy requires individual responsibility, which is impossible without critical history. It thrives in a spirit of self-awareness and self-correction. Authoritarianism, on the other hand, is infantilizing: We should not have to feel any negative emotions; difficult subjects should be kept from us. 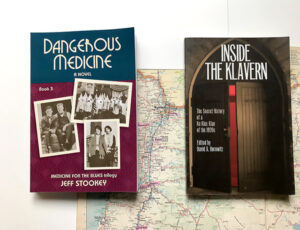 Restrictions on teaching evolution, the pseudo-science of eugenics, the white supremacy of the KKK’s 100% Americanism (i.e. native-born white Protestants), and laws meant to outlaw Catholic schools in favor of public schools are all issues of the 1920s that are highlighted in Medicine for the Blues. Shadows of these controversies haunt us today in dangerous ways.

All of this is bad for our nation.

Gordon Emmett Hall and Shirley Andrea Woika,
The American Biology Teacher (2018) 80 (3): 235–239.
“The Fight to Keep Evolution Out of Schools: The Law and Classroom Instruction”

Timothy Snyder, The New York Times Magazine, June 29, 2021
“The War on History Is a War on Democracy”

Inherit the Wind, a stage play based on the Scopes trial, by Jerome Lawrence and Robert E. Lee, 1955.
Also a 1960 movie directed by Stanley Kramer and starring Spencer Tracy and an all-star cast.

Evolution’s Rainbow, Diversity, Gender, and Sexuality in Nature and People, by Joan Roughgarden, U of California Press, 2004.