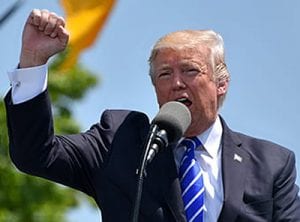 Mary Trump’s book, Too Much and Never Enough: How My Family Created the World’s Most Dangerous Man (2020) makes it clear that Donald Trump was emotionally abused by his father. Martin Pengelly’s review of this book [bold type indicates reference below] points up Mary Trump’s perspective as a trained clinical psychologist and provides these quotations:

“Child abuse is, in some sense, the expectation of ‘too much’ or ‘not enough’,” she writes. “Donald directly experienced the ‘not enough’ in the loss of connection to his mother at a crucial development stage.
“… Having been abandoned by his mother for at least a year, and having his father fail not only to meet his needs but to make him feel safe or loved, valued or mirrored, Donald suffered deprivations that would scar him for life.
“The personality traits that resulted—displays of narcissism, bullying, grandiosity—finally made my grandfather take notice but not in a way that ameliorated any of the horror that had come before.”

One might think Mary Trump is overstating the case by claiming that Donald Trump is the World’s Most Dangerous Man. But many others have drawn parallels between Trump and Adolf Hitler. 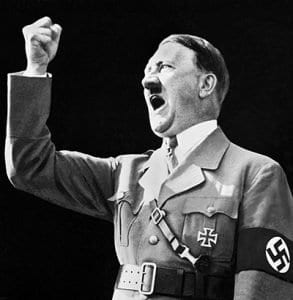 Walden Bello’s article “The United States Has Entered a Frightening Weimar Era” is an example. He reminds us: “To those for whom military intervention in the name of ‘political stability’ is unthinkable, they have only to see how many unthinkable things Trump has done to American political traditions in just the last few months, with undying support from his large mass base.” Bello points to other democratic societies like Chile where a military coup followed “violent street warfare instigated by right-wing paramilitary gangs like…today’s Proud Boys, American Nazis, and the Klan.” In an environment where some 74 million Americans may believe Joe Biden to be illegitimately elected, “Future electoral contests for power may well end up being decided by a strong dose of street warfare, as the U.S. goes the way of Germany’s ill-fated Weimar Republic.” The January 6th insurrection could be just a prelude. 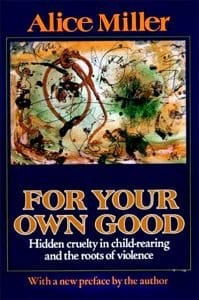 The book For Your Own Good by Alice Miller describes Adolf Hitler’s boyhood in terms similar to Trump’s. Hitler’s sister Paula reported, “It was my brother Adolf who especially provoked my father to extreme harshness and who got his due measure of beatings every day.” The beatings may have occurred as early as when Adolf was four years old.

In a show of rebellion, Adolf decided to run away from home. Somehow Alois [Adolf’s father] learned of these plans and locked the boy upstairs. During the night Adolf tried to squeeze through the barred window. He couldn’t quite make it, so took off his clothes. As he was wriggling his way to freedom, he heard his father’s footsteps on the stairs and hastily withdrew, draping his nakedness with a tablecloth. This time Alois did not punish with a whipping. Instead, he burst into laughter and shouted to Klara [Adolf’s mother] to come up and look at the “toga boy.” The ridicule hurt Adolf more than any switch and it took him…“a long time to get over the episode.”

Alice Miller writes of Hitler, which is similar to Trump: “His relationships with women, his perversions…and his whole aloof and basically cold relationships with people in general reveal that he never received love from any quarter.”

But on the stage of world politics he [Hitler] unconsciously enacted the true drama of his childhood—under another guise. He, like his father before him, was now the dictator, the only one who had anything to say. It was the place of all the others to be silent and to obey. He was someone who aroused fear, but he also commanded the love of his people, who prostrated themselves at his feet just as the subservient Klara [his mother] had once done at the feet of her husband.
….
Perhaps no better commentary can be found to illustrate Hitler’s legendary powers of seduction: whereas the Jews represented the humiliated, defeated side of his childhood self that he tried with all his might to do away with, the adoring German Volk…were his good and beautiful side that loved his father and was loved by him. The German Volk…assume the role of Adolf, the good child. Hitler as father protects the child’s pure soul from danger by driving out and destroying “the wicked Jews,” i.e., “wicked thoughts” as well, so that undisturbed oneness between father and son can finally prevail.

Alice Miller makes a connection between abuse and addiction:
“We can see what a child who has not been shown respect and therefore lacks self-respect does with ‘liberated’ sexuality when we consider child prostitution and the current drug scene. Here we can learn, among other things, about the disastrous dependency (on other people and on heroin) that can result from children’s ‘liberation,’ which does not deserve the name if it is accompanied by self-degradation.”

In Matthew Wills’s article “How White Supremacy Is Like a Drug” he describes a study where “Scholars Pete Simi, Kathleen Blee, and others, interviewed eighty-nine former members of white supremacist organizations….They discovered that the process of disengagement from the ‘totalizing commitment’ and ‘complete identity transformation’ of hate is much like that of an addict trying to stay clean.”
Wills later observes: “Noting that drug use triggers dopamine, the neurotransmitter that helps us feel good, Simi et al. point out that certain conditions, like having strong ties, high levels of commitment, and long-term exposure, reinforce the urge to repeat actions that release dopamine in the brain. ‘Social environments and related identities may generate neuro-physiological changes that over time mimic addiction,’ they write.”

In James Kimmel, Jr.’s article “What the Science of Addiction Tells Us About Trump” we learn of another connection with addiction:

…your brain on grievance looks a lot like your brain on drugs. In fact, brain imaging studies show that harboring a grievance (a perceived wrong or injustice, real or imagined) activates the same neural reward circuitry as narcotics.
….
Recent studies show that similarly, cues such as experiencing or being reminded of a perceived wrong or injustice—a grievance—activate these same reward and habit regions of the brain, triggering cravings in anticipation of experiencing pleasure and relief through retaliation. To be clear, the retaliation doesn’t need to be physically violent—an unkind word, or tweet, can also be very gratifying.…what this suggests is that similar to the way people become addicted to drugs or gambling, people may also become addicted to seeking retribution against their enemies—revenge addiction.
….
Like substance addiction, revenge addiction appears to spread from person to person….Trump is able to spread his grievances to thousands or millions of others through Twitter, TV and rallies. His demand for retribution becomes their demand, causing his supporters to crave retaliation—and, in a vicious cycle, this in turn causes Trump’s targets and their supporters to feel aggrieved and want to retaliate, too.

Alice Miller clearly describes that it was common for German families to severely discipline their children, so child abuse was a common occurrence. I believe this is also true for many Trump supporters. Abused children often grow up to be abusive bullies.
For the same reason that German Volk were drawn to Hitler, I believe that Americans who were abused as children are drawn to Trump. It is similar to the phenomenon of an abused spouse unable to leave an abusive relationship. For four long years Trump abused the American public with his cruelty, lies, and chaos. It is reasonable to conclude that Donald Trump’s separation of children from their parents at the border and the pedophile aspects of the QAnon conspiracy, widely held by Trump supporters, are related to child abuse syndrome.

In seeking solutions, we must wake up to the fact that, as Kimmel says, “Retaliation in response to grievances is the primary motive in intimate partner violence, youth violence and bullying, street violence, lone-actor attacks, police brutality, and terrorism.” It is the psychopathologies of the general population that we must confront. Personalities like Trump or Hitler are not causal but rather they awaken, validate, and escalate repetition compulsion, addiction to hate, and revenge addiction in the populace.
Kimmel points out “There are no quick fixes with addiction. We’re in for a long haul….Media, entertainment and social networking giants also rely upon grievance and revenge-based content to attract viewers and users and increase advertising and sales. More people need to become savvy about how, why and for whose benefit they are being made to feel aggrieved and must decide to stop dealing in the drug of their own destruction.
“We must also increase public education, from school age through adulthood, about healthy ways to process feelings of hurt or humiliation.”

“The United States Has Entered a Frightening Weimar Era”
by Walden Bello, 7 January 2021

For Your Own Good by Alice Miller, 1980
[Pages 142-169 in the print edition]
“Adolf Hitler’s Childhood: From Hidden to Manifest Horror”

“How White Supremacy Is Like a Drug”
by Matthew Wills, 22 January 2021

[note: Kathleen Blee is the author of Women of the Klan: Racism and Gender in the 1920s, which was essential background for my novel trilogy Medicine for the Blues.]

“What the Science of Addiction Tells Us About Trump”
By James Kimmel, Jr., 12 December2020

I recently read Sherman Alexie’s memoir You Don’t Have To Tell Me You Love Me. He makes the point over and over that after more than four hundred years of trauma at the hands of European colonists and the US government, Indigenous Americans re-enact their traumas in bullying, rape, substance abuse, and other forms of repetition compulsion and revenge addiction.