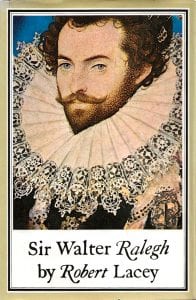 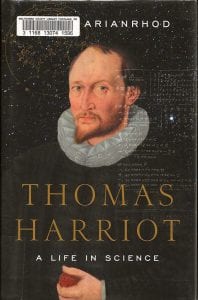 Racism, nationalism, and religious differences all contributed to prejudices of thought in Elizabethan England—very much like in the present-day USA.

Queen Elizabeth’s grant of Letters of Patent to:
“…our trusty and well-beloved servant Walter Ralegh Esquire…to discover, search, find out and view such remote, heathen and barbarous lands, countries and territories, not actually possessed of any Christian prince, nor inhabited by Christian people.”
—spring of 1584
[Lacey, p. 55.]

In preparation for planting a New World colony, Ralegh sent two ships from Plymouth in April 1584, headed to North America on a reconnaissance mission. They followed Columbus’s route to the Caribbean then headed north to the mid-Atlantic coast.

By July 1584 Ralegh’s men landed at what is now Hatteras Island off present-day North Carolina, and “‘took possession’ of the land in the queen’s name, and performed ‘the ceremonies used in such enterprises.’” [Arianrhod, p. 56.]

The first contacts with indigenous people were friendly and entailed feasting and the exchange of gifts. The Englishmen stayed for about a month, trading with the Indians and scouting for a suitable site for a future colony.

In September of 1584 one of Ralegh’s ships returned to Plymouth with Manteo and Wanchese, two young Algonquian men from the newly claimed land that was now called Virginia in honor of the Virgin Queen. It is believed that these two natives came voluntarily, perhaps to learn about these strange men who had come to their shores and as tribal delegates to develop trading relationships with the English, who had metal tools and other desired trade items.

“Manteo and Wanchese were not the first exotic strangers to amaze the English. When the Irish tribal chief Shane O’Neill and his bodyguards visited Elizabeth’s court in 1562, their long, unkempt hair, long-sleeved saffron gowns and ancient battleaxes , and the ‘howling’ sound of their native language, had given English courtiers the impression…that the Irish were as alien and ‘primitive’ as the peoples on the other side of the world.” [Arianrhod, p. 57.]

In 1580 Ralegh had engaged a young Oxford mathematics scholar, Thomas Harriot, to improve navigation techniques and train navigators for Ralegh’s sailing ventures. Harriot may have been introduced to Ralegh by Richard Hakluyt (the younger), an Oxford lecturer and an avid propagandist for English colonization. But Harriot had wide-ranging intellectual interests that would prove him to be a pioneering “‘physicist,’ ‘ethnologist,’ ‘linguist,’ and ‘scientist’…all anachronistic terms that would have” baffled Harriot. [Arianrhod, p. 2.]

Thomas Harriot was tasked with teaching the young indigenous Americans to speak English and with learning the Algonquian language himself. So Harriot developed one of the first phonetic notation methods:
“An universal alphabet containing six and thirty letters, whereby may be expressed the lively image of man’s voice in what language soever; first devised upon occasion to seek for fit letters to express the Virginian speech.” [Arianrhod, p. 61.]

In Elizabeth’s Letters of Patent to Ralegh she uses the terms “heathen” and “barbarous.” “Heathen” simply meant pagan or non-Christian. “Barbarous” simply meant “foreign” in Latin, which many educated Elizabethans spoke. The words “primitive” and “savage” were also used by Elizabethans to describe people from other cultures. The latter derives from the Latin “silvaticus” meaning “of the woods.” Arianrhod suggests that in the late 1500s the English meaning was closer to “living close to nature,” not “violent” or “uncontrolled” as it generally does in English today. He adds, “This view did not necessarily conflate less sophisticated technological achievement with lesser moral or intellectual qualities, although for many Europeans that leap was all too easy. So it was notable that Harriot rarely used the word ‘savage’ or ‘primitive’ at all, preferring ‘inhabitants’ or ‘people’…and stressing the Algonquians’ technical ingenuity, such as their method of making canoes….It was an easy descent from ‘barbarous,’ ‘primitive,’ and ‘savage’—no matter how ‘objective’ the intent—into what we now call racism.” [Arianrhod, p. 68.] Arianrhod quotes Jason Scott-Warren, “The early modern period could be fluid in its thinking about matters of race and gender in ways that later ages were not,” then he adds, “Many Englishmen saw the ‘Indians’ as exemplars of a better society than that of an England-in-flux.” [Arianrhod, note 19, p. 298.]

In contrast to Harriot, Ralph Lane, who served as governor of the new colony “invariably used the word ‘savage’ in his writings….saying he had had his hands full with the ‘infinite business’ of governing ‘amongst savages,’ especially the ‘wild men of my own nation [presumably the soldiers], whose unruliness is such as not to give leisure to the governor to be almost at any time from them.’ ” [Arianrhod, p. 79.]

It is important to remember the degree of religious intolerance in Europe at that time. The Protestant Reformation pitted the Catholic countries like Spain against England. The English referred to the Pope as the “Antichrist of Rome” and Spain as his sword. The threat of the Spanish Armada was destined to dominate politics leading up to its defeat 1588. Indeed, Ralegh did not sail on his planned colonial expedition to Virginia in 1585, because Elizabeth held him at court, and in 1587 she appointed him to fortify the national defenses against any possible attack from Spain.

Back in 1580 Ralegh had been given a command against rebels in Catholic Ireland, where the Protestant Elizabeth had been endeavoring to put down an uprising. This was accomplished with bloody brutality, especially when a party of Italian and Spanish mercenaries arrived to aid the Irish Catholics.

Later in 1586 Ralegh was named in royal letters patent to colonize Irish counties of Cork and Waterford and establish such a robust English Protestant presence as to dominate this southern area of Ireland. [Lacey, p. 105.]

“When he went to explore the jungles of South America [in 1595], Walter Ralegh was to treat the naked savages of the Guiana swamps with more respect and kindness than ever he showed the Irish.” [Lacey, p. 34-5]

This may have been in part because the indigenous Americans were prime targets for conversion to Protestant Christianity, one of the main aims of English colonization, while the Irish Catholics were seen as committed enemies.

Treatment of the Algonquians

So Ralegh’s intention was to treat the Virginia natives with kindness and respect.

The Spaniard Bartolomé de Las Casas had sailed to the new world with Columbus after 1492 and he became appalled at the treatment of the indigenous Americans by his fellow countrymen. Las Casas began advocating for the rights of these Indians. “In 1542, for instance, he wrote a scorching account of the unimaginably brutal slaughter…of ‘these gentle sheep,’ who were ‘without malice or duplicity.’ ” [Arianrhod, p.70.]

Richard Hakluyt had read Las Casas and wrote to Ralegh that “the ‘Indians’ should be treated with ‘all humanity, courtesy and freedom.’” So Ralegh adopted a code of laws for the colonists that stated “no Indian should be forced to labor unwillingly,” “no-one should strike or misuse any Indian,” “none shall enter an Indian’s house without leave,” and “no soldier shall violate any woman.” [Arianrhod, p.70.]

This first English colonial expedition set sail in April of 1585. But even before the colonists arrived at the site of their new home on Roanoke Island to begin building homes and defenses, an incident of major importance occurred.

The fleet had accomplished the Outer Banks of the present day Carolinas in June 1585, and a party of leaders, including Harriot, made visits to several Indian villages. After leaving the village of Aquascogoc, it was discovered that a small silver cup was missing from the English baggage. Vice Admiral Amadas was sent back to the village to retrieve the cup while the rest of the party went ahead to map the coastline. When the missing cup was not produced and the villagers fled, Amadas and his men burned the houses and destroyed the crops.

This was the first atrocity by the English colonists against the indigenous peoples. In spite of all Ralegh’s careful planning and his directives about treatment of the natives, the colony had gotten off to an ominous start—consequences of which we live with to this day.

By August, the colony began establishing itself on Roanoke Island. Harriot began learning all he could about the local Algonquian people, the flora and fauna, and mapping the territory. He collected an extraordinary amount of cultural information about the natives, their agricultural practices, their edible plants and medicines, their fishing and hunting, cooking practices, pottery, their religion and rituals including the smoking of tobacco in clay pipes. All this was published in Harriot’s 1588 pamphlet, A Brief and True Report of the New Found Land of Virginia.

As the colonists’ supplies dwindled during the winter, and relief ships failed to show up, they became more and more dependent on the natives for food. Relations continued to sour. In the end the English killed a number of the Indians including the local chief who was beheaded. About a week later Francis Drake’s ships were spotted off the coast, arriving to reinforce the colony. By then the colonists had had enough and decided to return to England with Drake. In June 1586 they departed, after almost a year, abandoning the colony they had built. They arrived back in England at the end of July.

Some consider Harriot to have been “the most environmentally sensitive of all early promoters of American colonization.” He considered the Algonquians his friends and showed great respect for them. Arianrhod goes on to say, “The tragedy of colonization weighs on us today, but when Harriot prepared for Virginia, he did not foresee what was about to unfold. Perhaps he should have done. It is a difficult balance for modern readers, and a problematic story to tell from a non-indigenous perspective.” [Arianrhod, note 39, p. 303.]

It is curious that, for the Elizabethans, Ireland and America were seen equally as targets for colonization. Misunderstandings between cultures—whether Native Americans, African Americans, European ethnic groups, or white Anglo-Saxon Protestants—all drag a profound history along with them. As William Faulkner wisely said, “The past is never dead. It’s not even past.”

Thomas Harriot, A Life In Science by Robyn Arianrhod, Oxford U Press, 2019.