Re-evaluating Our Founding Fathers…Monkey Wrenches in the US Constitution 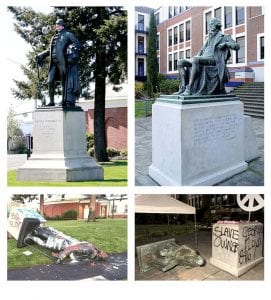 The recent protest movement against police brutality toward unarmed black people under the banner “Black Lives Matter” should force Americans to re-examine our history. Part of that re-examination is exemplified by the toppling of statues commemorating slave owners. Particularly troubling are attacks in Portland, OR, on statues of George Washington and Thomas Jefferson, who are generally acknowledged as key players in establishing American values of freedom and liberty, although both owned slaves. Such men are excused today by saying that they were “complicated.”

What they were was men of their time, a very different time from ours. They would not have understood our contemporary concepts of equality for women or gays, let alone for African-Americans. Joseph J. Ellis puts it this way: “The residents of late-eighteenth-century America lacked access to many of our modern values, meaning that they lived in a premodern world that is forever lost to us….But the same interpretive problem also flows in the opposite direction. Viewing and judging the founding generation through the lens of our own values is inherently presumptive…” [page xvii, see below.] This was one of my primary challenges in writing Medicine for the Blues: trying to see the world through the eyes and minds of people living in an earlier era.

During the COVID-19 stay-at-home period, I’ve been doing a lot of gardening, and while digging in the dirt, I have been listening to a lot of podcasts. In Episode 1 of the 1619 podcast, Nicole Hannah-Jones describes that when Thomas Jefferson came to Philadelphia to write the Declaration of Independence in June of 1776, he brought slaves to care for him. One of them was his wife’s half-brother—which is to say that his wife’s father had children with one of his slave women. So Jefferson’s servant was actually his brother-in-law. Meanwhile, Jefferson was writing about “these truths” that “all men are created equal.” At that time one fifth of the population of the colonies was in slavery. After the death of his wife in 1782, Jefferson had a long-term relationship with his slave Sally Hemings, who was another half-sibling to his wife. Jefferson fathered six children with Hemings.

Part of Jefferson’s argument for the colonies to be independent from England was that the colonists were “slaves” to the king. Colonial loyalists to the crown shot back, “How is it that we hear the loudest yelps for freedom from the drivers of Negros?” In response, Jefferson wrote in an early draft of the Declaration that the king was to blame for bringing slavery to the colonies and the institution was not the colonists’ fault but one more wrong with which England had burdened the colonies. When Southern plantation owners saw that passage in the draft, they demanded that it be removed before they would sign on. [re 1619 podcast.]

During the Constitutional Convention of 1787, 25 of the 55 delegates from throughout the colonies were slave owners. (Jefferson, at the time, was in France serving as US ambassador.) In Joseph J. Ellis’s book The Quartet, Orchestrating the Second American Revolution, 1783-1789 (2015), he contends that George Washington, Alexander Hamilton, John Jay, and James Madison were instrumental in engineering the transition from the loosely structured and ineffectual Articles of Confederation between thirteen separate colonies (rather like the League of Nations), to a national republic with a central government. Three of them were slave owners, leaving out Hamilton, who belonged to a society dedicated to freeing slaves—but he never expressed any sentiments along those lines at the 1787 Convention. Washington brought three of his slaves with him to Philadelphia, to look after his comfort.

While this Convention was purportedly arranged to reform the Articles, these four men intended from the beginning to craft a new governing document that would create a representative federal nation. And if the undertaking fell through, these four men believed that the thirteen colonies would devolve into irrevocable disarray, possibly going their own separate ways and allying with European nations, thus defeating the whole purpose of the war for independence. So they knew that the Convention had to succeed in forging an agreement that would create a nation. They could not risk any rifts that would doom a unifying accord. The stakes were high. Failure was not an option.

This Convention and its delegates are often revered in mythical if not hagiological terms, but the process of creating the US Constitution was as messy as any other sausage-making exercise. The issue of slavery, according to Ellis, “was simultaneously omnipresent and unmentionable”—a “ghost at the banquet.” Madison later wrote, “The states were divided into different interests not by their difference in size, but principally from their having or not having slaves….It did not lie between the large and small states, it lay between the Northern and Southern.” [Ellis, pages 144-145]

So rather than risk a failed Convention, an eventuality that always hung over the delegates’ heads, the Quartet compromised. The result was a Senate where each state, regardless of population, got two representatives. This in spite of the founders’ belief that majority rule was the essence of a republic. And secondly, we got the Electoral College where each state got electors equal to their number of representatives in the House plus one for each senator. While the South got to count 3/5 of each slave for purposes of representation in the House, the Electoral College arrangement gave the South an advantage against the more populous North.

These two aspects of the Constitution are still with us and still influence our governance and our presidential elections. A recent Facebook meme says: “As long as we’re getting rid of monuments to slave owners, what do you say we start with the Electoral College?”  [FB/speaking truth.]

In Chris Hayes’ podcast Why Is This Happening? with Jesse Wegman about his book Let the People Pick the President, the Case for Abolishing the Electoral College (2020), there is a long discussion about the Constitutional Convention. It is a fascinating revelation of how we ended up with the arcane institution of the Electoral College. The Great Compromise giving all the states equal representation in the upper house, the Senate, and the compromise that counted each slave as three fifths of a person for purposes of representation in the lower house, the House of Representatives, were a heavy loss for the Quartet and their allies. These contentious debates had been so wrenching that no one wanted to reopen the wounds suffered when some states extortionately threatened a walkout. So when it came time to finally decide on how to elect a president, an issue that had been kicked down the road, the idea of the Electoral College was hurriedly presented and agreed upon before the Convention ran out of time. This is humorously described in Chris Hayes’s podcast as resembling the rush to complete a school term paper the night before it is due.

In fact, the institution of slavery was, like the banks of the financial crisis of 2008, “too big to fail”—a fact that Nicole Hannah-Jones makes clear in her podcast. But the slave issue was too vexing to mention in the Constitution. “As a result, the most salient piece of evidence is silence,” Joseph Ellis says. [page 145.] The word “slavery” does not appear in the Constitution until the Thirteenth Amendment abolished it.

Ellis goes on to explain a more profound reality: “At an even deeper psychological level, the circumlocutions deployed for evasive purposes in the Constitution accurately captured the denial mechanisms that many of the southern delegates had developed in their daily lives as slave owners: ways of talking and even thinking designed to obscure the moral implications of their livelihoods and lifestyles….The unofficial policy of silence at the convention on the all-important question of slavery was, to be sure, a political decision driven by the collective awareness of its explosive implications, but silence and willful obliviousness came naturally to most southern slave owners. It was the way they had learned to live their lives.” [pages 144-145.] This observation mirrors Carl Holman’s realization in Book 3 of Medicine for the Blues, that humans frequently choose willful blindness rather than see what is right before them.

Nicole Hanna-Jones contends that “it is black people who have been the perfecters of this democracy.” She goes on to point out that from the post-Civil War Reconstruction period, when the 13th through the 15th Amendments were passed, to the civil rights movement of the 1950s and 60s, to the Black Lives Matter movement, it has been African-Americans who have pushed this nation forward in living up to its purported values. Black people have stood their ground and demanded that the words of the Declaration of Independence, the Preamble to the Constitution, and the Bill of Rights be fulfilled. And all the other rights and freedoms won by women and the LGBTQ community stand on the shoulders of those earlier struggles.

We Americans have a difficult history. Let us acknowledge it, learn from it, and rise above it.

Why Is This Happening with Chris Hayes, podcast:
“Abolish the Electoral College” with Jesse Wegman
June 2, 2020