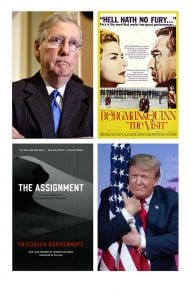 The Swiss writer Friedrich Durrenmatt (1921-1990) has created an intriguing and challenging body of work that is as relevant today as it was when he was coming of age during the rise of the Nazis in Germany. Two specific aspects in Durrenmatt’s work epitomize two particular situations of our current political reality—Mitch McConnell’s relationship to Russia and Trump’s relationship to media.

Durrenmatt’s stage play The Visit, which in 1964 was made into a brilliant film starring Ingrid Bergman and Anthony Quinn, is based on the premise that every person’s allegiance can be bought, and if you are the world’s richest person, you can easily pay the price. This is analogous to what is happening today in Mitch McConnell’s home state of Kentucky.

This Kentucky story begins with Russian oligarch Oleg Deripaska, who has ties to both Russian president Vladimir Putin and Donald Trump’s former campaign manager Paul Manafort. Before the financial crash in 2008, Deripaska was the ninth richest man in the world. His company, Rusal, is the world’s second largest aluminum manufacturer after China.

In April 2018, Deripaska was sanctioned by the US as punishment for the Russian attack on the 2016 presidential election, and according to The Hill, for “allegations of threatening the lives of business rivals, illegal wiretapping, extortion and racketeering.”

But in January 2019, the Trump administration lifted the sanctions on Rusal, purportedly to ease pressure on world aluminum markets where 2018 sales of Chinese aluminum had increased rapidly. (The sanctions on Deripaska himself remain in place.) After heavy lobbying and an intense PR campaign by a raft of DC consultants hired by friends of Deripaska, a deal was reached with the US administration to reduce the oligarch’s control of Rusal, (however he maintains significant ties to officers of the company). McConnell was a supporter of lifting sanctions on the company.

Democrats in the US House of Representatives passed legislation to maintain the sanctions on Rusal, but this measure failed in the Republican-controlled Senate where Majority Leader Mitch McConnell presides with an iron fist.

Then in April of this year, Rusal announced that it would be investing $200 million in a new aluminum plant in a depressed area of McConnell’s home state of Kentucky, the largest such plant built in the US in decades and one in which Rusal would have a 40% stake.

“‘Oleg Deripaska understands better than most Russian oligarchs how money buys influence in Washington,’ said Michael R. Carpenter, a former National Security Council official during the Obama administration,” the New York Times reported. And just as occurs in Durrenmatt’s play, “…when there are big fees on the table, people’s point of view is not the same,” according to Tom Keatinge, a former banker with J. P. Morgan who now directs the Center for Financial Crime and Security Studies at a British research organization.” (See the New York Times story.)

Durrenmatt’s mystery/thriller The Assignment is a complicated tale about a woman documentary filmmaker who accepts an assignment to make a film about the unsolved murder of the wife of a Swiss psychiatrist.

Much of the story involves issues of observation and surveillance—of the wife by the psychiatrist, of the murder scene by the filmmaker, and of the filmmaker by various state and private entities. The subtitle of the novel is “On the Observing of the Observer of the Observers.” In conversation with her friend, a logician, the filmmaker listens to his theory that rather than being angry that one is being watched, one might, quite the opposite, become tormented that they were not being watched.

I can’t think of a better explanation why President Donald Trump needs to be endlessly observed, by the press, by the crowds at his mass rallies, by the public reading his frequent tweets, by lawmakers, and by other international leaders. The black hole of Trump’s insecurity must be constantly assuaged by our non-stop, watchful, observing attention.