Prejudice and Consciousness…“My” Prejudices and “Theirs” 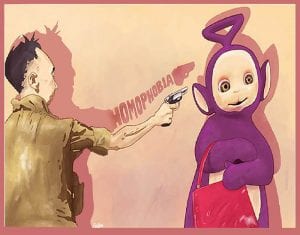 When I participated in the Pathfinders intergenerational program at the Q Center, LGBTQ elders were paired with middle school Gay Straight Alliance kids. In discussion with an African-American teenage boy, who said his family was religious, I assumed he belonged to a black Baptist church. It turned out his father was Jewish and his mother was Catholic, not at all my preconceived notion. I had to adjust my thinking.

When a young elementary school friend once said in my presence, “Gays are weird,” I felt I had to speak up. I told him that my partner and I were gay—did he think that we were weird? His physical response indicated that he was emotional and confused.

In Gordon W. Allport’s landmark book The Nature of Prejudice he states:
“If a person is capable of rectifying his erroneous judgments in the light of new evidence he is not prejudiced….We tend to grow emotional when a prejudice is threatened with contradiction. Thus the difference between ordinary prejudgments and prejudice is that one can discuss and rectify a prejudgment without emotional resistance.”

My preconceived notion about the African American boy was a misconception, and I was able to “rectify my erroneous judgments in the light of new evidence.” In contrast, my young friend who believed that “gays are weird” grew emotional when his prejudice was threatened with contradiction. (In time he overcame this judgment, which he had likely picked up in conformity with his grade school peers.)

Harvey Milk implored gays to come out of the closet so that people capable of rectifying their erroneous judgments would be confronted with the light of evidence that gays are not unusual or other, but present in all parts of society.

As the AIDS epidemic forced more and more gay men to come out, societal attitudes began to shift when Americans saw that many of their friends and neighbors, even movie idols like Rock Hudson, were gay. 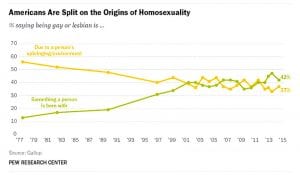 When I first encountered a transgender woman in the early 1990s, I had a visceral reaction. In recent years I have met and enjoyed getting to know a number of transgender people whose friendship I now cherish.

In my encounter with the African American teen, the exchange between my grade school friend and me, and my encounters with transgender people, the personal experience between myself and the other was key. The specific, open, personal interaction can disrupt abstract categorical preconceptions. In breaking down prejudice, the me/you bridge opens the us/them bridge.

A 2011 article by Clara Moskowitz titled “5 myths About Gay People Debunked” lists these misconceptions: 1) Animals are all straight, 2) Gay relationships don’t last, 3) Most pedophiles are gay, 4) Gay parents aren’t as good as a father and a mother, and 5) Being gay is a choice. She goes on to cite studies that contradict these beliefs. However, in many people’s minds these prejudices persist. Facts aren’t enough. Why is this?

“Conformity to social norms, then, may offer an explanation for prejudice in some cases,” says S. A. McLeod.

In an article by Jeanna Bryner, she suggests in her title what many of us have long imagined: “Homophobes Might Be Hidden Homosexuals.” She cites “a new study finding those individuals who are most hostile toward gays and hold strong anti-gay views may themselves have same-sex desires, albeit undercover ones. The prejudice of homophobia may also stem from authoritarian parents, particularly those with homophobic views as well, the researchers added.”

Gordon Allport makes a related observation: “Many studies have discovered a close link between prejudice and ‘patriotism’…Extreme bigots are almost always super-patriots.”

In our politics today we are seeing many links between authoritarianism, patriotism, and prejudice. 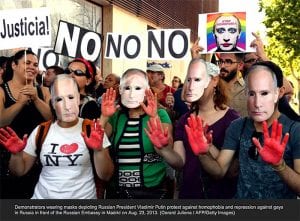 Breaking out of prison

So what is the solution?

Allport states: “An outstanding result of studies of bigoted personalities seems to be the discovery of a sharp cleavage between conscious and unconscious layers.”

Dr. George Weinberg says, “In the fight against the persistence of homophobia our best hope is something Jung called ‘the antiseptic power of consciousness.’”

Michael Meade confirms this: “The role of trickster figures and trickster deities and myths is ultimately to bring healing and greater consciousness to people. In a sense, they intend to trick people into waking up and reflecting upon ways in which we fall into fallacies and become willing to blame others for problems and suffering that we have contributed to.”

But all this is not new. In ancient Greece, Socrates told us: “Improvement of the mind is ingeniously affected by the prisoner’s own active desire, thereby making him first accessory to his own confinement.”

May we all strive to liberate our own minds and encourage others to do the same.