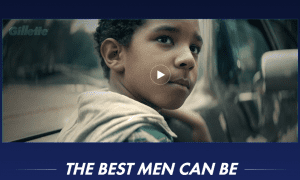 Originally, I imagined writing this blog about the flap over Gillette’s controversial #MeToo commercial alongside a discussion of beauty standards and what’s being called “beauty-standard denialism.”

First, the Gillette ad has been both praised and damned. From the polling standpoint the ad was a success for Gillette.

The VERVE Team writes, “According to data from Morning Consult based on a survey conducted in the days after the ad was released, the public is generally responding positively. In the category of ‘shared their values,’ the ad increased Gillette’s standing to 71% up from 42% while the negative response only increased from 9% to 15%. Generally positive feelings about the ad were at 61% compared to only 17% negative feelings. So while there were some complaints, there were many more accolades….We got this ad because, like Nike, P&G did their research and found that social responsibility sells. Gillette knew before the ad came out that they would get more customers than it lost on this ad.” That’s the good news.

On the other hand, it received “an unprecedentedly negative reaction on YouTube with over 750,000 dislikes and highly negative comments,” according to David Fuller, whose article I will discuss later.

The commercial’s themes of “toxic masculinity,” sexual harassment of women, and bullying by young boys are all hot button issues these days. I wanted to make the points that (1) a prominent example of these themes is the man in the White House, and that (2) with the 50th anniversary of the Stonewall riots coming up in June we have a great example of gay men in dresses and high heels standing up to the bullying of the police and holding them accountable for violating the freedom of assembly.

Second, the issue of beauty standards is portrayed as an example of patriarchy and male privilege. But with the rise of body positivity and beauty-standard denialism, the new attitude “puts the onus on women to improve their self-esteem instead of criticizing societal beauty standards.” So says a review of the Amy Schumer movie I Feel Pretty. The review goes on to conclude that “It’s become taboo to admit that the societal ideal is a highly specific standard that hardly anybody can live up to.” Gay men can easily recognize that there is a similar standard of male beauty inherited from ancient Greece. Just look at all those old statues.

Reporting on Only Trumpets, a short film named “best in fest” at last year’s OutFest, Towleroad news writes, “Engulfed in the hyper-masculinity presented by gay men, for gay men, across pop culture, films and pornography, it occurred to director Tristan Scott-Behrends that if, ‘we are going to shift the way we treat each other and ourselves in efforts to overcome internalized homophobia and misogyny, our creative culture must start offering imagery where feminine-presenting or gender non-conforming men are presented in situations where they are depicted as deserving of love and sexually desirable.’” I remember old dating ads in gay newspapers stating firmly, “no fats or fems.”

And I envisioned tying together the Gillette ad with the beauty-standard issue by exploring the whole concept of shaving hair off our bodies and asking where in heck did that come from.

But then I ran across an article by British journalist and filmmaker David Fuller entitled “Gillette & toxic masculinity—dispatch from the gender war” which gave me an entirely new perspective on these issues. Fuller’s explanation of our current political moment is much more nuanced than merely calling out patriarchy and male privilege. Let me quote him at length to do justice to the subtlety of his argument:

[Fuller quotes Fernando Desouches:] “I think [Gillette] focused on the symptoms of masculinity, saying, OK, men are more violent, men are not well behaved with women—they focused on that and not with the underlying issues. They didn’t focus on ‘men are in crisis,’ why are they in crisis, they are in crisis because they are performing who they are and not being who they are. So instead of empowering them to be who they are, [Gillette] said ‘why don’t we teach them how to be’…” [Emphasis mine.]
….
[Fuller continues:] We all have anger and frustration at times, and by cutting ourselves off from it—pushing it down into the ‘shadow’ as the psychologist Carl Jung explained—we don’t lessen it’s power, quite the opposite. We disassociate from it and ‘project’ it out, in psychological terms. We begin to experience a world full of ‘angry’ people as we (over)react to others’ anger.
….
While the most high profile example of toxic masculinity in the world sits in the White House, and ‘liberal values’ feel newly under threat, it’s hard for liberal types (among whom I count myself), to realise the level to which their [“liberal”] ideology permeates the vast majority of the institutions, from media to statutory bodies.
Harder still to recognise that it’s actually primarily the reaction TO that ideology that is sparking the wholesale rejection of left/liberalism in western democracies.
….
It simplifies and characterises masculinity as nothing but a pathology, and fails to recognise the positive side of traditional masculine values like self-sacrifice, responsibility and protection. Worse, it reframes the history of men traditionally sacrificing themselves to provide for their families, as an exercise in hoarding power and privilege to themselves.

Fuller bases his reasoning on the work of Warren Farrell, a former board member of National Organization for Women (NOW) in New York City and author of The Boy Crisis. Fuller and Farrell are not saying that there is no patriarchy or male privilege. In their own unique way men are as oppressed by patriarchy as women—it can be seen as two different sides of the same coin. Farrell posits that the way through our current crisis is raising our level of emotional intelligence and learning to deeply listen to one another. Being heard is the antidote to hatred and anger.

Farrell’s ideas are neither superficial nor easily spelled out in sound bites. I encourage you to watch Fuller’s extended interview of Farrell to better understand his views (references and links below). Warren Farrell reminds me of Robert Bly’s observation that many men are wounded because of what we inherited emotionally from our fathers. We have much to learn.

https://medium.com/the-new-york-times/i-feel-pretty-and-the-rise-of-beauty-standard-denialism-21972771e31a
“‘I Feel Pretty’ and the Rise of Beauty-Standard Denialism,” The New York Times, Apr 24, 2018

https://youtu.be/ESiyb28fTQ4
‘Men and women after #MeToo’, with Warren Farrell (part 3 of 3)
Rebel Wisdom
Published on Sep 12, 2018
If the cultural conversation looks increasingly like a dysfunctional relationship between men and women, how can we move forward? This is the third in a series of films on ‘Men and Women after #MeToo’ from Rebel Wisdom, David Fuller’s website.