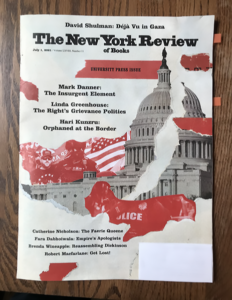 The coup d’etat by the violent mob of insurrectionists in Washington, DC, on January 6th, 2021, failed.

Mark Danner’s article “Reality Rebellion” (in the July 1, 2021 issue of The New York Review of Books; see References below) describes the insurrection. He noticed a flag that read “Lead Us Across the Rubicon!” and “The die is cast!” 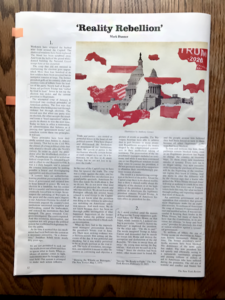 (History lesson: “Julius Caesar’s crossing the Rubicon river on 10 January, 49 BC precipitated the Roman Civil War, which ultimately led to Caesar’s becoming dictator and the rise of the imperial era of Rome….he is said to have uttered the phrase alea iacta est—the die is cast—as his army marched through the shallow river.” —Wikipedia, referenced below

Danner continues:
“‘It’s time to sweep them all away,’ the young man waving the flag told me: ‘And you see we can’t do it by voting.’….Not every one of Trump’s voters feels this way, but what we know through polling and reporting suggests that most of them do.”

Not only are the Republicans undermining confidence in our election processes by promulgating the Big Lie that Donald Trump won the 2020 election, they are now passing laws in state legislatures across the country to make voting more difficult, especially for voters of color and the young, who tend to vote Democratic. More troubling, Republicans are also making it easier for state legislatures to overturn the will of the voters in Republican controlled states.

On The Ezra Klein Show podcast from The New York Times, June 25th, 2021, (referenced below) Klein interviews Ari Berman about “Voting rights, minority rule and the G.O.P.’s assault on elections.” 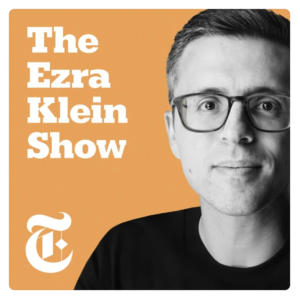 Late in the interview Klein comments:
“There was a recent letter by 100 leading scholars of democracy, and they warned that, quote, ‘Republican-led state legislatures across the country have, in recent months, proposed or implemented what we consider radical changes to core electoral procedures. Collectively, these initiatives are transforming several states into political systems that no longer meet the minimum conditions for free and fair elections. Hence, our entire democracy is now at risk.’”
….
Later Berman replies:
“….And we have institutions that already blunt and work against the will of the people. And now we have an effort by the Republican Party to just flat-out nullify the will of the people, writ large. And so, to me, that is a really, really disturbing development. And it’s one that we should recognize the severity of, that the interplay between the institutional lack of democracy and the anti-democratic forces in the Republican Party is very, very dangerous. That if they get control of all of these levels of power, the question is, how far will they go.”

US and the German Weimar Republic

There are parallels between the United States today and German history in the 1920s during the Weimar Republic.

Hitler explained his new tactics while still in prison:
“When I resume active work it will be necessary to pursue a new policy. Instead of working to achieve power by armed coup, we shall have to hold our noses and enter the Reichstag against the Catholic and Marxist deputies. If outvoting them takes longer than out shooting them, at least the result will be guaranteed by their own constitution. Any lawful process is slow…Sooner or later we shall have a majority and after that, Germany.”
—William L. Shirer, p. 170 (referenced below)

In a 2008 New York Times opinion piece, Ian Kershaw sums it up: “Hitler came to power in a democracy with a highly liberal constitution, and in part by using democratic freedoms to undermine and then destroy democracy itself.” (referenced below)

Are Mitch McConnell and the “establishment” Republicans making a mistake by not speaking out more forcefully against Trump and his followers? Should they be defending our Constitution more assertively?

Danner’s article states: “In effect the Republicans have cast their lot with…this ‘whole new set of voters brought in by Trump.’ Only he can bring them—or anywhere near enough of them—to the polls. But the more he courts them, the more alienated suburban Republicans become. The more these ‘Biden Republicans’ stay home or even vote for Democrats, the more the party is forced to depend on Trump. The party belongs to him.”

How long will the corporate and wealthy donor class stick with this party of Trump? They certainly oppose any strengthening of the “socialist” wing of the Democratic Party that might increase taxes on them, impose stronger regulations, or pass stricter pollution and climate laws. But will they continue to support a Republican Party populated by voters who are “animated by ‘white nationalism and racial resentment, and whose overwhelming motivation is a deep worry that Black people and immigrants will control the country.’” —Danner

In another important article in that same issue of the New York Review, Christopher R. Browning, writing about “Blue Bloods and Brownshirts,” (referenced below) says, “The relationship between German nobles and the Nazis was a misalliance in which attraction prevailed over repulsion.”….“Despite the social chasm that separated the German nobility from the Nazi mass movement, common enemies and shared aversions provided one foundation for the misalliance. Most nobles welcomed the Nazi smashing of the Communist and Social Democratic Parties and the effective abolition of the Reichstag and the Weimar Constitution.”….“The noble cabal around Hindenburg persisted in its delusions, ‘hiring’ Hitler in January 1933 as chancellor in a cabinet that it thought it could control….it took Hitler just a few months to brush his noble partners aside and establish total control over a one-party dictatorship.” 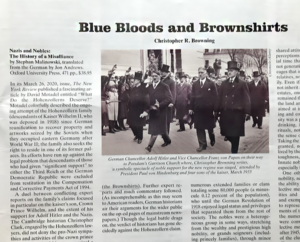 This is backed up in William L. Shirer’s The Rise and Fall of the Third Reich:
“The political blindness of the German Army officers, which was to prove so fatal to them in the end, had begun to grow and to show. The political ineptitude of the magnates of industry and finance was no less than that of the generals and led to the mistaken belief that if they coughed up large enough sums for Hitler he would be beholden to them and, if he ever came to power, do their bidding.” (p. 201)

The Danger of Violence

But there is a scarier possibility for the US: greater political violence.

In August 2020 tens of thousands of right-wing Germans demonstrated in the streets of Berlin. A few hundred gathered at the Reichstag, Germany’s parliament building. They were mostly white men, anti-vaxers, QAnon supporters, and far-right extremists.They broke through police barriers and ran up the steps to the main entrance. At the top some tried to get inside. But they were held off by three police officers until back-up arrived. The whole thing lasted only a few minutes.

This story is from Part 5 of The New York Times podcast Day X (referenced below), about “a network of far-right extremists inside the German military and the police. It’s a story about a changing national identity—and the backlash against it—raising a question that democracies across the world are waking up to: What happens when the threat is coming from within?” 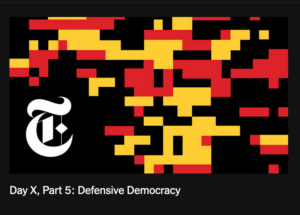 The incident described above occurred four months before the January 6th attack on the US Capitol building by right-wing extremist groups, which also included current and former members of our military and police.

Danner writes:
“‘For the next four years,’ as the terrorism expert Malcolm Nance put it after the coup, Trump ‘is going to lead a political insurgency that will have a paramilitary insurgent element.’”

“Members of these violent groups see a political dispensation gaining force under an illegitimate president that privileges minorities and immigrants, which they understand as part of an elite plot to ‘replace’ them as central participants in the country’s politics. Even before the Capitol attack a number of terrorism researchers saw the conditions for ‘incipient insurgency’ emerging in the United States.”

And in Danner’s footnote number 12 we find this: “In late May a national poll showed that 28% of Republicans agreed that ‘things have gotten so off track [that] true American patriots may have to resort to violence in order to save our country.’”

Danner concludes with this bleak assessment:
“‘Can our democracy,’ the president implored Congress, ‘overcome the lies, anger, hate, and fears that have pulled us apart?’ The plain answer is that there is as yet no sign that it can. All around us are signs that our angry politics are likely to grow angrier—and perhaps more violent still.”

Title: “The Republicans are setting off a ‘Doom Loop’ for democracy”
The Ezra Klein Show podcast, June 25, 2021.