The Rule of Law…If You Can Keep It 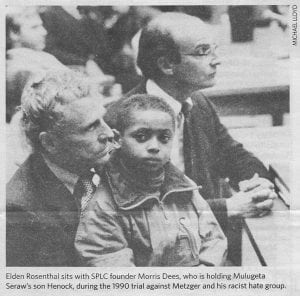 When I began writing Medicine for the Blues, I was inspired by the 1990 trial of Tom Metzger, the American Nazi, and his white supremacist hate group, White Aryan Resistance (WAR). Mulugeta Seraw, a 28-year-old Ethiopian student was bludgeoned to death on the street in southeast Portland, OR, one night in November of 1988 by a group of young white skinheads. Morris Dees of the Southern Poverty Law Center (SPLC) brought a civil suit against Metzger charging him with responsibility for the death because he sent a trainer to Portland to encourage violence against racial minorities.

When I found out about the growth of the Ku Klux Klan in Oregon in the 1920s, I wanted to highlight the parallels between that organization and the racist skinheads of the 1980s.

Elden Rosenthal, who worked with Morris Dees on the Metzger trial, wrote a recent guest commentary in the publication SPLC Report (Summer 2018, Vol. 48, No 2). Referring to Metzger as an American Nazi, he asks the question, “It can’t happen here, right?” Rosenthal writes that the Pandora’s box of racial hatred opened by Tom Metzger is the same racial animus unleashed by Donald Trump’s campaign and election.

White nationalism and white supremacy in the populace is one thing, but what Rosenthal saw at an ICE detention center in Georgia he describes as institutionalized white nationalism led by the executive branch of the federal government. For those who believe it can’t happen here, he reminds us of the genocide of Native Americans, Jim Crow laws, turning away Jews from our borders when they were fleeing Nazi Germany, and the internment of Japanese. Our history is full of white nationalism. But Rosenthal points to courageous lawyers and honest judges as our hope for holding back the tide of hatred flooding our nation. He concludes: “The rule of law is our best protection against the darkness on the horizon.”

I wish I could be optimistic on that count, however Trump has already shown his contempt for the rule of law and the Constitution by flouting the emoluments clause. Mitch McConnell, the Republican leader of the US Senate, has blatantly ignored the Constitution by denying a sitting President his right to appoint a Supreme Court justice. The current administration is ignoring US and international laws and treaties that guarantee refugees the right to seek asylum.